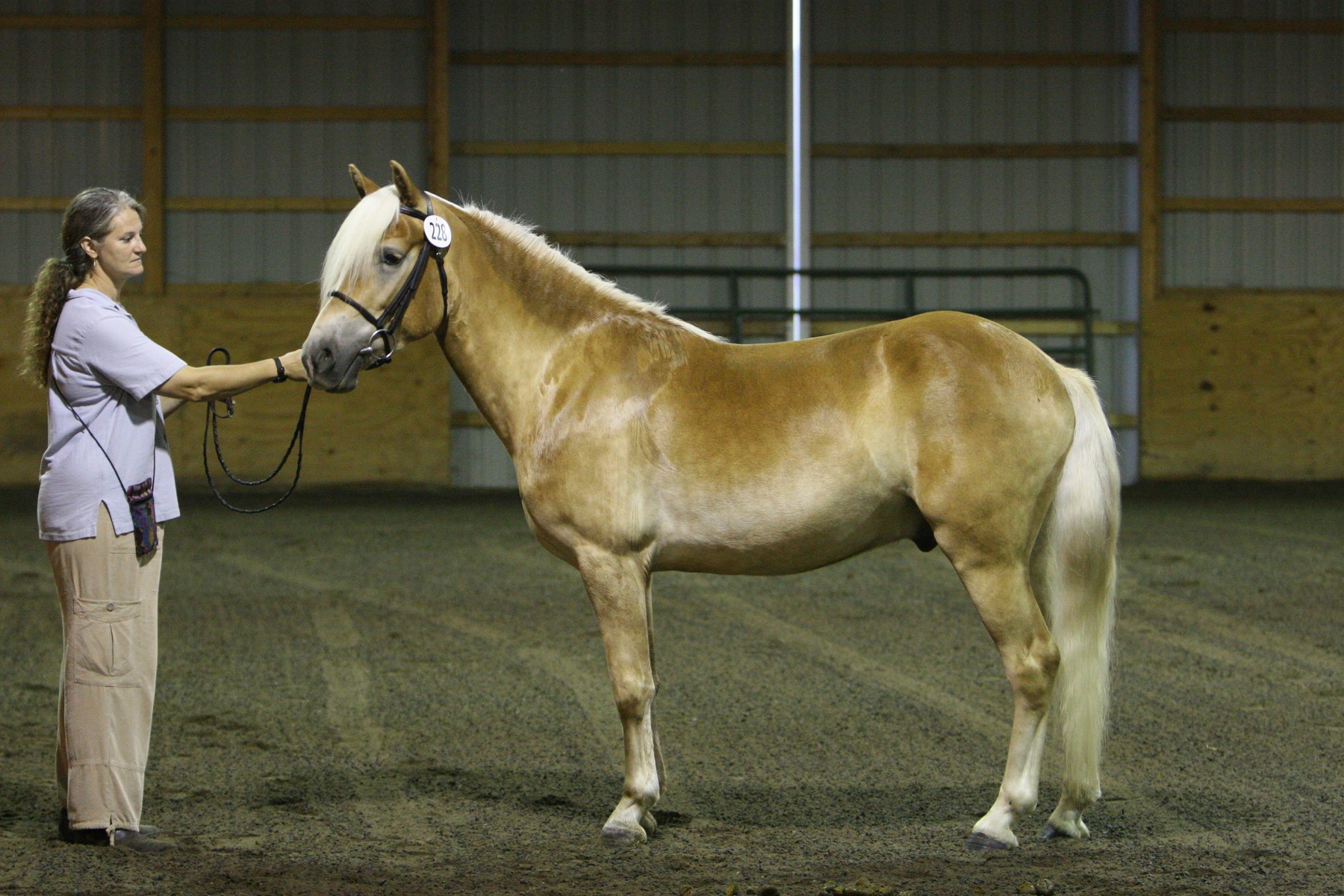 Out of two high silver AHR classified horses (78 points), this 5-year-old is the total package–an amazing athlete with LOADS of talent and personality, an easy keeper with great feet (he doesn’t need shoes), a quiet and gentle nature, excellent conformation and a wonderful work ethic! Tony has a nice overtrack at the walk, action and extension at the trot, and a smooth, well-balanced three-beat canter. He picks up his leads well, and has never tried to buck, spook, or run-off. Tony is smart and willing, and picks things up very quickly. At shows people have remarked at how quiet and calm he is!

Tony began his under saddle training in spring 2007 with a professional dressage trainer. In 2007 he was shown intro level and won second place (out of nine horses) his first time out at the 2007 AHR National Show! In 2008 Tony was shown in-hand and under saddle in trail classes, English, and Western classes at the New York Gold Haflinger Classic. He has also been ridden on trails and the quiet dirt roads near our farm. Tony is in full-time training with a professional dressage trainer on the east coast until sold. Check back for updates as to his training.

Tony’s first dressage trainer had these things to say about him:

[Tony] was always wonderfully responsive to the leg, and ALWAYS soft in the hand. He has a lot of natural ability for dressage work. He WANTS to use his hind end well, he WANTS to step underneath of himself and carry. He WANTS to be soft in the hand and reach for the contact. And since we took our time, that natural desire for all the right things was never spoiled.

As I introduced new things to him undersaddle, he took each new task in stride. From the start, he was balanced undersaddle. The first time we tried his canter, he gave a nice depart, didn’t run into it, and did not have any problems with his leads. He was not rushy or unbalanced. He stayed soft in the bridle, and gave me some of the nicest first time canter I have ever experienced.

The first show we took him to [under saddle] was the 2007 Nationals. He acted like he was an old seasoned show horse. No problems in the warm up, no problems with the metal bleachers, no problems with the announcer. I was SOOOO proud of him. He is going to be a very easy horse to show, and one that is fun to show.

As far as his potential in dressage, I would say the sky is the limit with this guy. I do not see a limitation for him. He has the right type of approach to learning. He is willing, he is eager, he is curious. Physically, he shows great balance and ability. He has a lovely natural consistency to his gaits, and will not have a problem developing collection and extension. I believe he will be a very fancy dressage pony, easily doing FEI work…He is a really neat horse, with a lot of potential, and a very good foundation. The sky is the limit. –Shelby Blades

Tony’s natural athleticism, self-carriage and willing work ethic, combined with his quiet and gentle (not at all spooky) nature, makes him an outstanding youth or 4-H horse. While his training has focused mostly in dressage up to this point, Tony would also be an outstanding English mount or eventing pony.

In addition to working under saddle, Tony leads, clips, ties, loads, and stands well for the farrier and vet. He has been worked in the round pen, lunges, and has been ground-driven and long-lined (inside and outside). He would make a fantastic pleasure or combined driving pony as well; we have just chosen to focus on his under saddle work. Tony gets along with any other horse that he has been turned out with–mares, gelding, and even our young stallion! He is just as happy turned out in a pasture with a run-in shed as he is in a stall.

Don’t miss this fantastic opportunity to purchase a talented FEI Pony Prospect or hunter/eventing prospect. You will not find a better tempered or talented horse with so much potential at such a reasonable price! Please call for price. Price to increase as training increases. Serious inquiries only please.

MAY 2009-SOLD!! THANK YOU KRIS AND KATELYN! TONY HAS BEEN SOLD TO A WONDERFUL HOME IN PENNSYLVANIA WHERE HE WILL BE SHOWN IN DRESSAGE AND HUNTER/JUMPER CLASSES AT HAFLINGER AND OPEN SHOWS! HE IS PICTURED ABOVE WITH HIS NEW OWNER! THANK YOU AND BEST OF LUCK TO THE BERGEY FAMILY ON THEIR PURCHASE OF THIS WONDERFUL GELDING!

Here are a few comments from Tony’s new family:

“Just wanted to say a big thank you for the opportunity to purchase this wonderful gelding! We love his kind and curious nature, and we couldn’t be more pleased with his willingness to start right in with lessons with both Katelyn and myself. He is such a smart boy, and his excellent upbringing is apparent…Thanks again, we are so grateful.”

Tony and Kate have been wowing the competition this summer in open walk-trot classes against other breeds, winning champion and reserve champion several times!

Tony and Kate just finished showing at their first show–the 2009 Buckeye Haflinger Show!! They participated in Hunter over crossrails, ridden dressage, walk trot classes and even games classes! Tony’s trainer said that he is exceeding her expectations as a kid’s pony, and we couldn’t be more pleased! 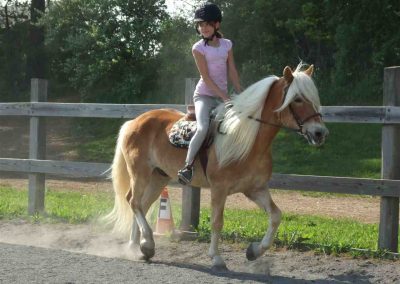 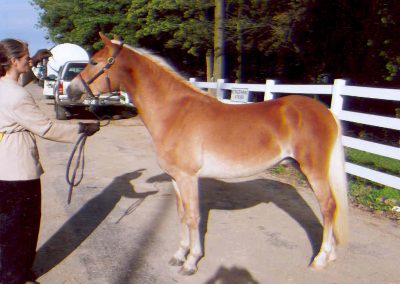 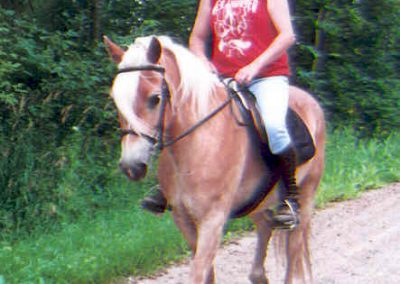 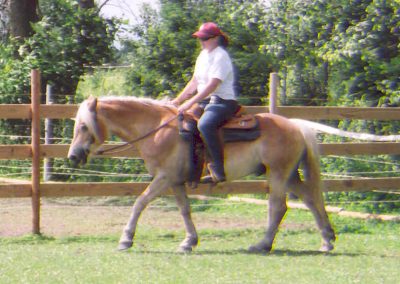 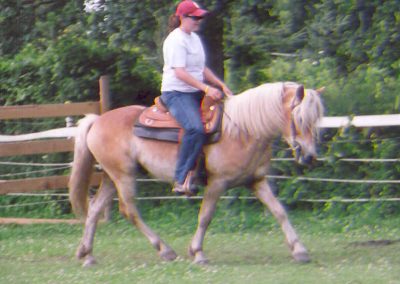 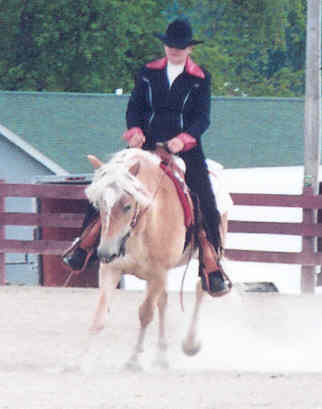 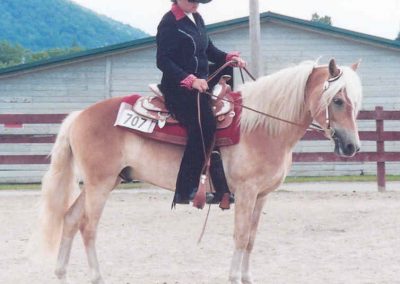 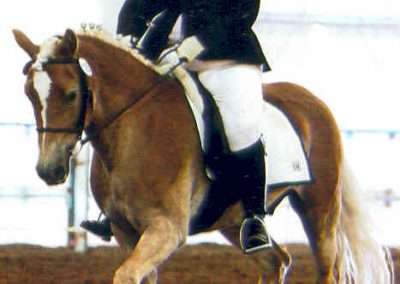 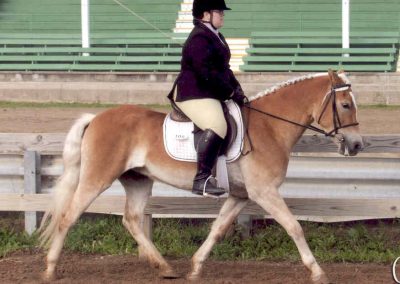 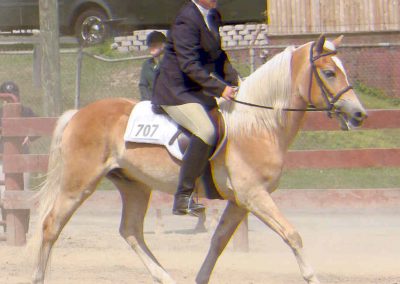 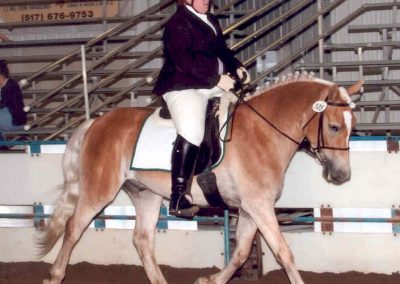 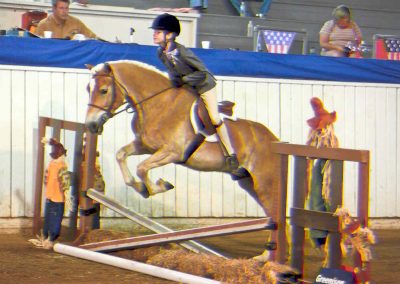 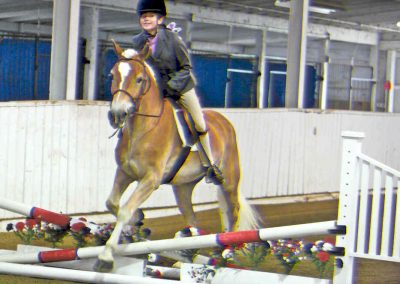 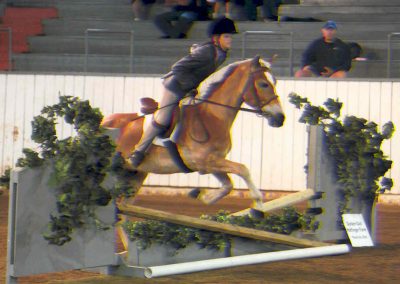 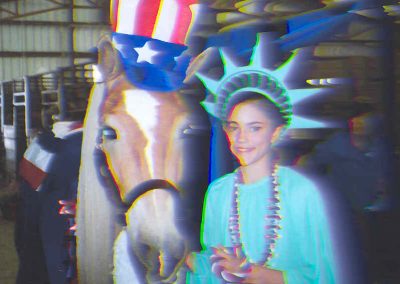