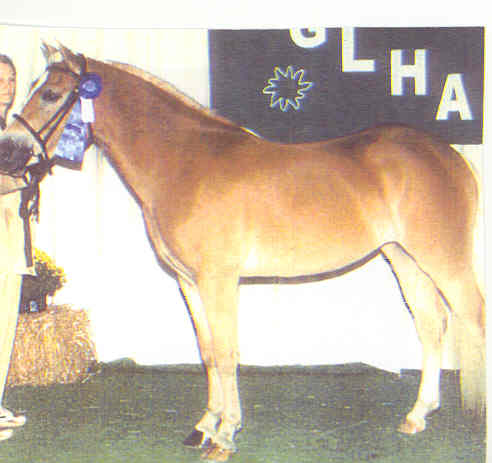 A stunning mare with a wonderful length of leg and neck, and an exceptional head and neck-set, Febe looks much taller than her 14.1+H. Febe is an outstanding show mare; some of her awards include: first place two-year-old pleasure mare and Grand Champion Pleasure two-year-old at the 2003 Great Lakes Haflinger Association Futurity, first place junior weanling pleasure filly and Reserve Grand Champion weanling (colts and fillies) at the 2001 American Haflinger Registry National Futurity, as well as second place pleasure SIP (Stallion Incentive Program) weanling (colts and fillies) in 2001. Febe was also runner-up (to her half sister, R Noble Rose APF) for the Breeder’s Award of Excellence (Division II) in 2001.

It was our desire to keep Febe at Lilac Farms as part of our breeding program, as she possesses the outstanding bloodlines and temperament that we find so important. However, after seeing Febe’s photo, her new owner fell in love with her (mind you, she was not for sale at that time!). After six months of on-and-off conversations, in March of 2006 we decided to sell Febe to her new home in Modesto, California. We know she is well-cared for and greatly loved! 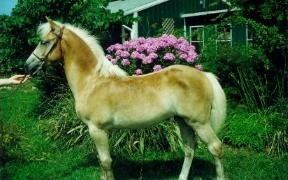 “I purchased Febe’s Noble Lady from Mary Procopio. Febe is not only beautiful, but also has the best temperament of any horse I have known. She is sweet and willing, and obviously had a good start with Mary. I also own her son, a gelding named Andante of Lilac Farms. He also has a sweet temperament passed down from his mother. I would defintely buy another horse from Mary.”
Anne Williamson Golden Heart Farm Modesto, California