Haflingers are a small breed of horse (not pony) that originated in the Tyrolian mountains of Austria. Contrary to some sources, the purebred Haflinger has no draft blood, but descends from a half-Arabian stallion and a refined Tyrolean mountain mare that resembled a small Warmblood. Their calm, gentle temperament, beautiful coloring, athleticism, and “easy-keeper” quality make them a great horse for people of all ages and disciplines.

These horses excel in all sport horse disciplines throughout the United States, Austria, Germany, Holland, and elsewhere in the world, including dressage and jumping, as well as in combined driving. To learn about the history of the Haflinger, click here for more information.

THe World Haflinger Federation (WHF) was reformed in 2013 and is now known as the Haflinger World Breeding and Sport Association (HWBSA). This entity sets the standards for Haflinger horses world-wide.

The epitome of the modern, sport horse Haflinger is liz Abendstern (pictured right), who stands at the Fohlenhoff in Ebbs, Austria, the center for Haflinger breeding in the world. Abendstern is a three-time World Champion Stallion (2010, 2005, 2000), two-time European Champion (2008, 2003), and multiple times Tyrolean dressage champion under saddle. Born in 1995, Abenstern stands 155cm (@15.1H). 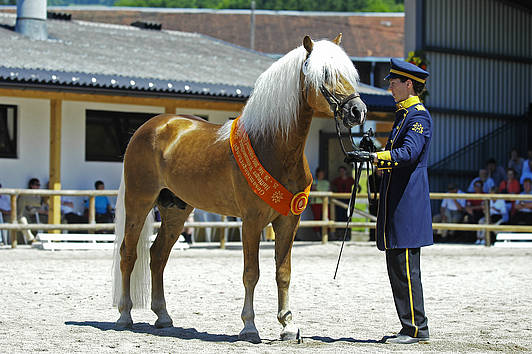 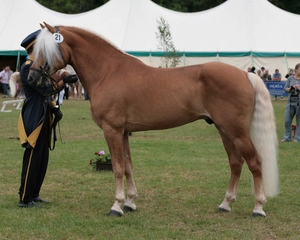 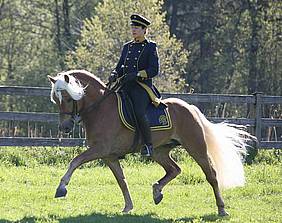 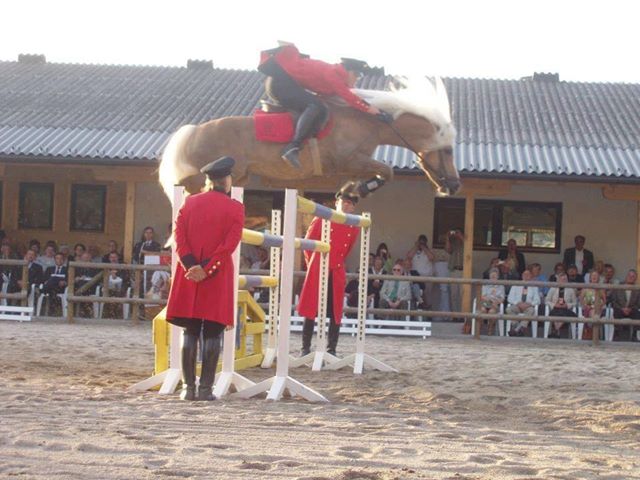 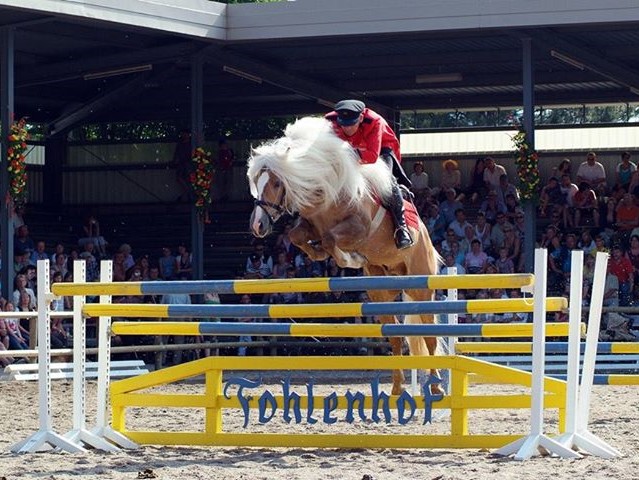 Contrary to what some believe, Haflingers can also jump. The Austrian stallion, Nordtirol (pictured left), holds the world record for Haflingers for jumping at five and a half feet! Nordtirol stood at the Fohlenhoff in Ebbs, Austria for most of his life and was sold to a breeder in the United States. Sadly, Nobelius is now deceased. He was born in 1994 and stands 146cm (@14.2H). 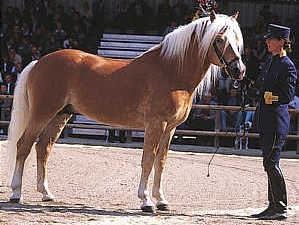 The World Champion stallion, Amadeus, sire of Abenstern and numerous other licensed stallions, holds the record for the highest score in the world ever received at inspection at 85 points. Born in 1989, Amadeus stood 152 cm (@15H), and is sadly, now deceased. 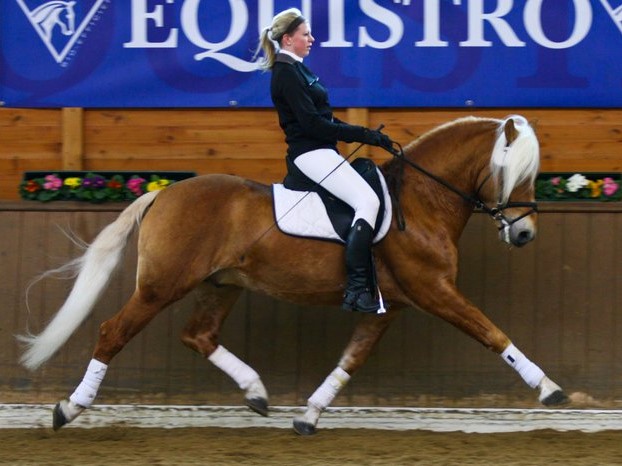 The stallion PrH Atlantic from Austria is an outstanding mover and excelling in dressage. 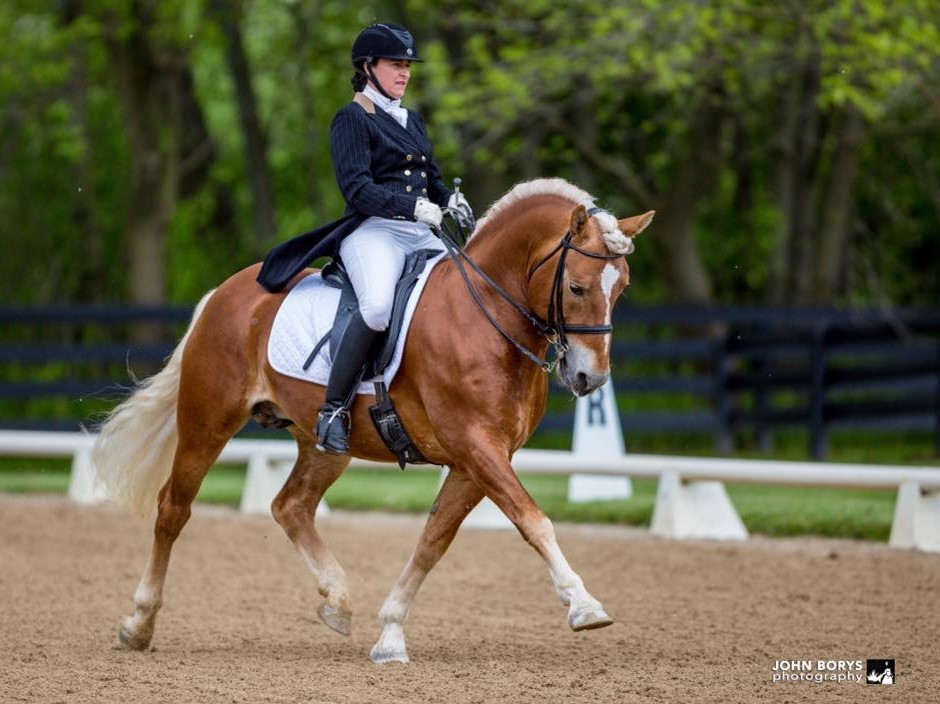 In the United States, Haflingers are also making their mark in the sport horse world. Brenner IK (Barolo x Luette) is a German imported Haflinger stallion formerly owned by Ingrid Krauss, training Grand Prix and shown at Intermediare B in 2019 before being sold. Brenner was also the 2019 National Dressage Pony Cup year-end Champion at Intermediare B. 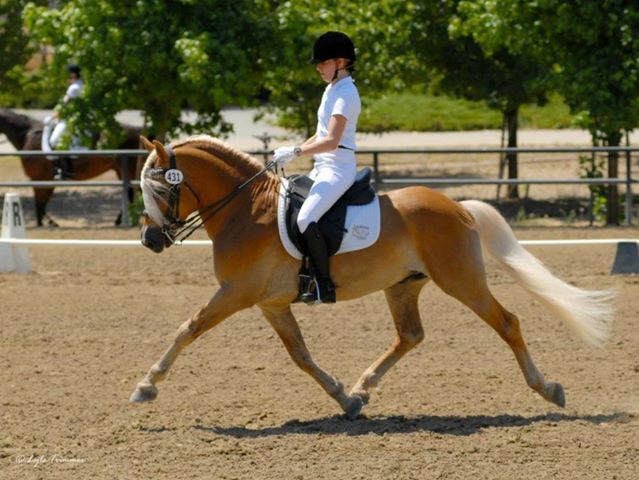 Also in the United States, Maximotion WSF, a German imported Haflinger stallion formerly owned by Wingspann Farm, is pictured in 2013 winning at fourth level with a score of 67.5%!

In 2013, our Austrian imported stallion, Stellar TVR, made history as the first Haflinger stallion to attend the North American Stallion Testing and be awarded his lifetime license with Weser Ems and RPSI! In 2011, Stellar was the first Haflinger stallion in North America to be inspected and approved for breeding by the Weser-Ems Verband (sport pony and small horse division of the German Oldenburg Verband), into their main Stud Book I, and Westfalen N.A., another German sport horse registry, into Main Stud Book I, starting their Haflinger Stud Book in the United States! His foals presented to RPSI have all received Gold Premium or high Silver Premium status, with two Inspection Site Champion Foals–one over nine Warmblood and Sport Pony foals, with another Stellar foal coming in Reserve! His first breeding age daughter place in the main mare book mare at her RPSI inspection, and awarded high silver (77 points) at her AHR inspection in 2015. She went on to win Reserve Champion at First Level in the USDF All-Breeds Awards Program in 2019, and was the Alaska Dressage Society Champion at Training Level for 2017. Another daughter out of a different mare was Champion and Premium mare at her Westfalen inspection in 2018 with an overall score of 80 and a 9 for her walk in a large group of quality mares, as well as being Gold classified at her AHR inspection! Her full sister was also awarded Premium at the same Westfalen inspection with an 8.5 on trot and was the third highest scoring horse, and a Stellar son was approved for breeding through Westfalen in 2019 pending performance results. 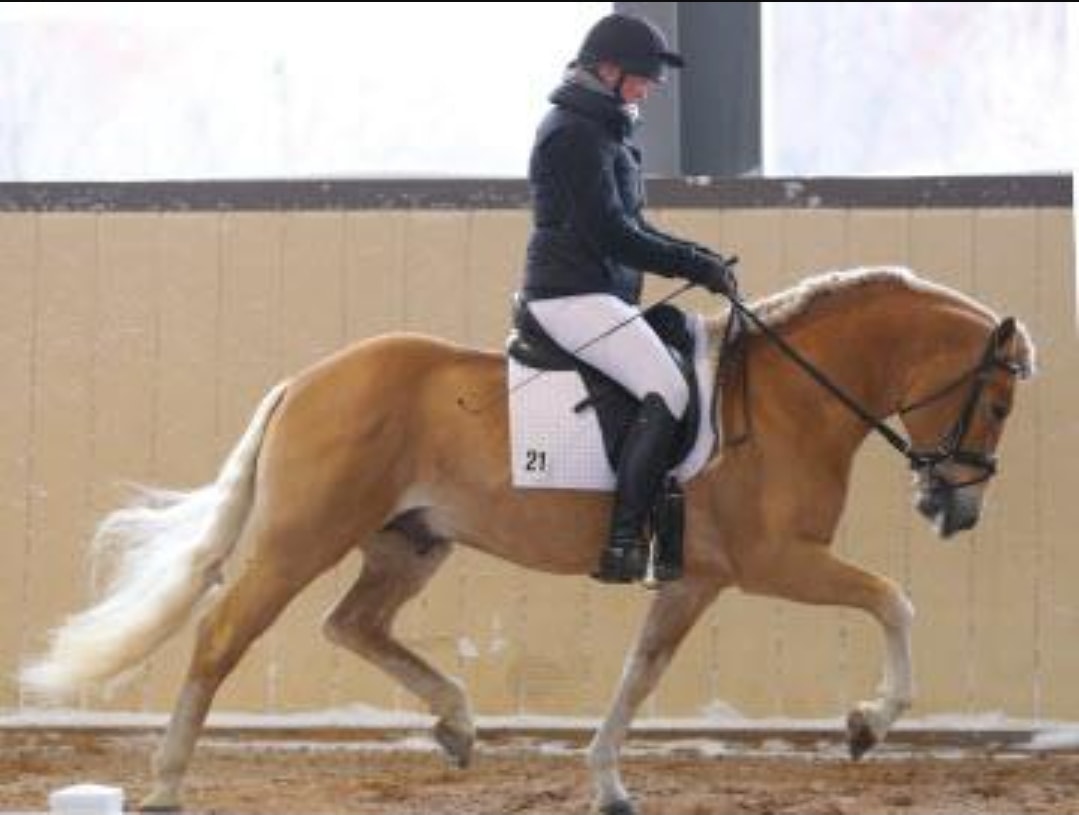 To read the article on Haflinger Sport Horses that appeared in the 2012 September/October issue of Warmbloods Today magazine, click here
Stellar himself has a pedigree full of European and World Champions and Gold rated horses, and descends from some of the top sire and dam lines in the Haflinger breed. His dam is by the gold mare, Clara, who scored a nine on overall movement at her Austrian inspection. His damsire’s dam, Dorlis, is one of the four strongest mare lines in Austria, and a producer of multiple World and European Champion sons and daughters. His sire, Straden, is the top St-line stallion in Austria, the sire of the 2010 World Reserve Champion Junior Stallion, and half brother to the 2010 World Reserve National Champion stallion! His damsire won his class and was champion of his keuring in Austria in 2000, and is full brother to three-time World Champion and two-time European Champion, Abendstern. Stellar stands 149cm (14.3H). Stellar’s foals are in high demand with riders looking for their future performance horse, with most selling inutero, sometimes two years in advance.

Many people have the misconception that breeders of sport horse type Haflingers are changing the breed, but the original Haflinger was a tall, versatile, athletic horse that resembled the sport horse Haflingers of today. The World Haflinger Federation is the governing body of the Haflinger breed, and as such, sets the standard. Today, one can find several breeders throughout the United States who are now breeding the same high quality horses with the type and movement found in Austria and elsewhere in Europe. Some of these horses can be found at our farm, located in Central Michigan.