Flawless NTF is a nine-year-old, tall (@15H), leggy, beautiful modern mare with outstanding movement who was bred by John and Judy Miller at New Trend Farm. Her sire, the German import Nasdaq NTF (now deceased) was known for his exceptional movement and for passing on his movement to his offspring. Nasdaq is by the German National Champion and leading N-line stallion in Germany, Nastral. Nasdaq’s dam is a full-sister to the dam of Amadeus (now deceased), the highest ever classified stallion in the world at 85 points. Flawless’s dam, the Austrian imported mare Fiona, also @15H, with long, clean legs and a long neck with a beautiful head, is out of the GOLD/ELITE Austrian mare, Falsetta, one of the leading mare lines in Austria, owned by the Eiter family. Fiona’s sire is Nabucco, the sire of many top horses throughout the world, including Notting Hill, Rivella TOF, and Nobleman of Tudor Oaks. Nabucco is especially known for producing outstanding broodmares. Fiona is a full sister to Fabalon, owned by Wingspann Farm. This mare line is very consistent in producing tall, modern, outstanding moving offspring. Flawless has had one foal, a 15.1+H spectacular colt out of Afghan III NTF, who is now gelded, but could have easily been an outstanding stallion candidate. We have had our eye on this beautiful mare for quite a while, and are grateful to John and Judy for allowing us to purchase her! We are very excited to breed this wonderful mare to our amazing young stallion, Stellar, in 2011! 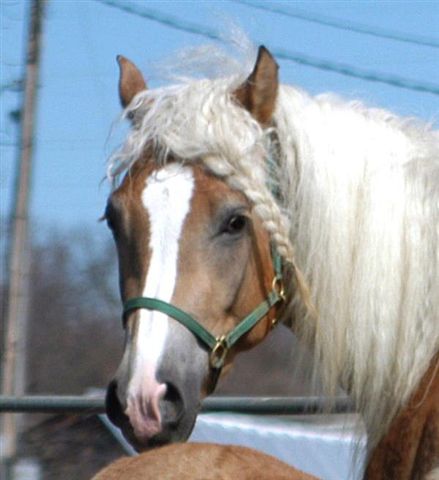